Claire O’Dell grew up in the suburbs of Washington, DC, in the years of the Vietnam War and the Watergate Scandal. Her short fiction has appeared in venues such as Asimov’s, Strange Horizons, and Tor.com. Her first novel, Passion Play, won the 2010 RT Reviewers’ Choice Award for Best Epic Fantasy, and her novel A Study in Honor won the Lambda Literary Award for Best Lesbian Mystery in 2019. You can find out more about her at www.claireodell.com. 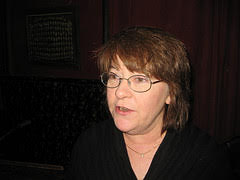